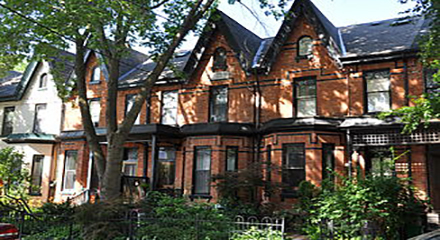 The Cabbagetown of the 21st century is a beautiful neighborhood, which holds the distinction as "the largest continuous area of preserved Victorian housing in North America". Its residents come from a wide variety of backgrounds, however they all share a strong sense of community spirit and pride in their neighbourhood.

Cabbagetown was once one of the city's poorest neighborhoods, inhabited mostly by Irish and Macedonian immigrants who brought little with them when they came to Canada. Much of the original Cabbagetown, however, was demolished in the 1940s to make way for a new housing development called Regent Park. The area now known as Cabbagetown is north of the original neighborhood and much of it bears little or no resemblance to the original area.

Neighbourhood revitalization began taking place here in the 1970s, when affluent Canadians began buying up dilapidated Victorians and fixing them up. The result is now a neighbourhood full of beautiful, brightly painted homes, wrought iron fences and lovely gardens. The housing prices are considered “high” relative to most of the city – with the average Victorian selling for anywhere between $1,200,000 to $1,500,000.

The most notable event in Cabbagetown is the two-day Cabbagetown Festival, held each September. The festival includes an arts and crafts fair, gala parade, and the popular Cabbagetown Short Film & Video Festival. In addition - every May, Cabbagetown residents gather at Wellesley Park to celebrate the official welcoming of Spring – it’s called the Forsythia Festival.

To find out more about Cabbagetown or other neighborhoods in the city, contact me and I would be happy to provide you with sales by neighborhood. It’s a smart way to stay on top of the game.